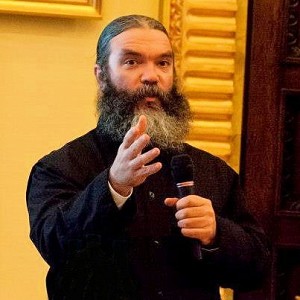 Fr. George is originally from Los Angeles County, California. His father was a fireman (back before we had firefighters), and his family enjoyed the outdoors with frequent camping trips in the Sierra-Nevada Mountains and surrounding deserts.

After graduation, he moved to Japan and taught English, but returned to the US and eventually enlisted in the United States Navy, where he worked as a TV journalist, primary on the island of Crete at a joint US-Greek facility. This is where he was exposed to Orthodox Christianity for the first time.

Again returning to the US, he had many questions regarding the history of Christianity, and began attending Fuller Theological Seminary in Pasadena, CA. His first class was in Biblical Greek, which was taught by an Orthodox Christian priest. Through that relationship, Fr. George learned about the orthodox faith and was received into the Church.

After marrying the lovely and talented Khouriyeh Barbara (Khouriyeh is the Arabic Christian title afforded to the wife of a priest), Fr. George was instructed by his bishop to attend saint Vladimir Orthodox Theological Seminary in Yonkers, New York. There he received his Master of Divinity in 2001, writing a thesis which was later published as the book, "Death by Envy: The
Evil Eye and Envy in the Christian Tradition."

After seminary, he was ordained to the Holy Diaconate and assigned to St. Nicholas Antiochian Orthodox Christian Cathedral in downtown Los Angeles, where he served until his ordination to the Holy Priesthood in 2003. He was then assigned to St. Timothy parish in Lompoc, CA, until 2006, when he was reassigned to St. Matthew parish in Torrance, CA. In 2017, Fr. George requested assignment to St. Katherine mission, and was granted a transfer with his family.

In addition to the normal seminary curriculum, Fr. George has also attended numerous seminars on a variety of topics, including Critical Incident Stress Management, Exorcism, and continuing education seminars hosted by the Antiochian Archdiocese of North America. He also is a student of Canon Law.

Fr. George has traveled internationally, speaking on the topic of Christianity and addiction. He has lectured in Romania, Finland, Russia, and the Bahamas. In addition, he has visited Singapore, Japan, Canada, Great Britain, Spain, Portugal, Germany, Italy, Switzerland, Belgium, Holland, Austria, and Greece.